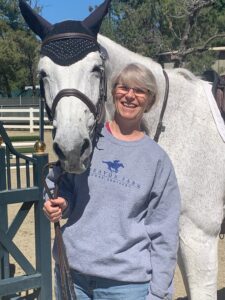 Cindy Bishop, who grew up in a family surrounded by horses her entire life, is the owner of Endeavor Farm.  Not only is Cindy passionate about all of the horses on the farm, she is equally passionate about the farm and the land it encompasses.  From the pastures, to the trees, to the flowering buds and their bees, Cindy is in love with the land she and her family now call home. 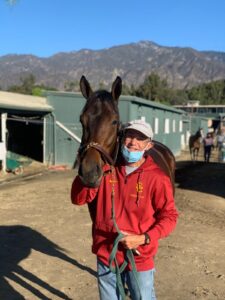 For over thirty five years, Mark Tsagalakis has worked and participated in the Thoroughbred industry, the last thirty years as a trainer, owner and breeder.  A graduate of the University of Southern California, Mark learned his craft working for and with veteran trainer Lou Carno and veteran trainer and farm manager Jack Evenson.  Soon after taking out his trainer’s license, Mark met, worked and learned alongside his mentor Mr. Steven Whitby.  A tremendous horseman with a wealth of knowledge in the Thoroughbred business, Steve worked for and learned under Mr. Louis Feustal, trainer of the mighty Man o’ War.  After Mark retired from training in 2018, the graded stakes winning trainer is now giving his time to representing and promoting Endeavor Farm primarily on the West Coast, but also on the east side of the country. Mark is passionate about both the industry as well as working alongside his business partners Terry Nickell and Keith and Laura Haag.  He resides in both California and on the farm in Kentucky with his wife and farm owner Cindy Bishop and their daughter Audrey. 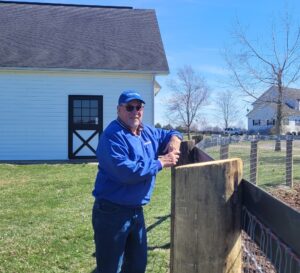 Terry is a second generation horseman with over forty years of experience in the thoroughbred industry. He grew up on Spendthrift Farm where his father managed for twenty five years, laying the foundation for a lifetime in the horse business. During his time at Spendthrift, he witnessed the foaling of Mr. Prospector and received the chance to be around some of the great stallions in turf history: Nashua, Swaps, Raise A Native, and Gallant Man to name a few. After college, Terry became broodmare manager at Bwamazon Farm. He later worked as farm manager at Chuck Schmidt’s Sunrise Farm for ten years. Following Schmidt’s passing, Terry became the stallion manager for Nathan Fox at Wafare Farm. During that time, Dynaformer was a resident stallion who went on to sire Kentucky Derby winner Barbaro. He worked in that position for four years, then moved up becoming the farm manager for Wafare Farm, later known as Richland Hills. During his time in this position, Terry met Mark Tsagalakis, a manager and client relationship that would blossom into the partnership that led to the founding of Endeavor Farm. Terry has been the managing partner of Endeavor Farm since the opening nine years ago. Terry is married to Caroline Nickell and lives in Georgetown, Kentucky. 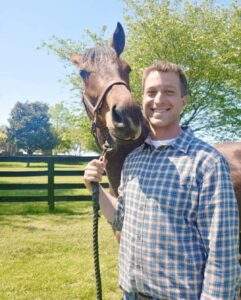 Originally a native of Louisville, Kentucky, Keith moved to Lexington in 2004 to attend the University of Kentucky. His first experience in the Thoroughbred industry occurred during this time when he began working at Maine Chance Farm, a breeding and research farm owned by the University. While an undergrad student, Keith also completed internships at Hagyard Equine Medical Institute as an embryo transfer intern and also for the USDA as an overseas agricultural intern in the Republic of Georgia. Upon graduating from UK in 2009 with a B.S. in Animal Sciences, he worked for a breeding season as a veterinary technician for Dr. Mike Beyer in central Kentucky. Keith moved to Carbondale, Illinois in 2010 to begin a Master’s program in Equine Reproductive Physiology under Dr. Eduardo Gastal at Southern Illinois University. While in graduate school he worked as a research assistant, teaching assistant, and was a proofreader for the international scientific journal Animal Reproduction. He also published eight scientific manuscripts, four of which he was the lead author. After successfully defending his thesis on equine preantral follicle dynamics, Keith received his M.S. in 2012 and moved back to Versailles, Kentucky, where he began working as Broodmare Manager at Richland Hills and has been with the farm since. When Endeavor Farm began. Keith moved into the role of farm manager.  Keith is married to Laura and they both live on the farm with their wonderful pets. 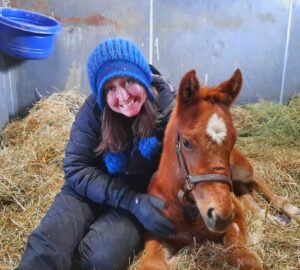 Laura is from Bardstown, Kentucky and has lived in the Lexington area since 2006 when she started attending the University of Kentucky. She graduated in 2010 with a bachelor’s degree in Animal Sciences with an emphasis in equine production. While a student at UK, Laura worked at the University’s equine breeding and research operation, Maine Chance Farm. She began graduate work studying equine nutrition under world renowned equine nutritionist Dr. Laurie Lawrence, focusing on the development of the microbiome of the equine hindgut and neonatal foal behavior. She assisted in many other projects expanding her knowledge in parasitology, microbiotic resistance, fescue toxicosis, grazing preferences, and mineral absorption. In addition, she completed internships through Hill ‘n’ Dale Farm as assistant sales coordinator and through Rood & Riddle working with reproduction specialist Dr. Pete Sheerin. She was also an equine veterinary technician throughout college. After finishing school, Laura started working full time for Hill ‘n’ Dale Farm as the veterinary assistant. Her responsibilities included managing herd health, running the lab and pharmacy, coordinating quarantine, international import and export, along with working in the breeding shed re-enforcing mares. She gained a wealth of knowledge in her experience working on a large-scale breeding operation working with some of the top stallions and broodmares in the business. Laura and Keith married in 2016 and enjoy traveling when they have the chance, hiking, kayaking and beekeeping.

That's a wrap! Seeking Paradise ended foaling season with the arrival of this stunning colt by Catalina Cruiser! Congrats to the Youngs! And thank you to all our clients for their trust in and our staff for achieving a perfect year! #Foalsof2022 #thoroughbred @LanesEndFarms

It was a long wait but Precious Life delivered this fancy colt by Honor A.P. early this evening. Congratulations to Circle Bar H on the addition this handsome colt! #flashy #foalsofinstagram #Foalsof2022 #thoroughbred @LanesEndFarms

Therearenorule broke her maiden with class today in the 5th @GulfstreamPark! Willow Lane Stables graciously allowed the farm and Keith Haag to keep a small part of her. Can't wait to see what she gets up to next! @TProctorRacing @kuehl_john @JaramilloJockey @KuehlRyan

Inara Serra welcomed this handsome colt by Maximum Security early this morning. He is up and figuring things out in record time! Congratulations to owner Lenny Kohn on the new addition! #Foalsof2022 #thoroughbred #maximumsecurity @coolmoreamerica

Feline Delite finally decided to let this monster of a colt out and about early this evening! Congratulations to Dream Big Racing on the newest addition of such a strong and leggy Mor Spirit colt! #thoroughbredsofinstagram #Foalsof2022 #plainbrownwrapper @spendthriftfarm